Buying Your First Mountain Bike – How Much to Spend? 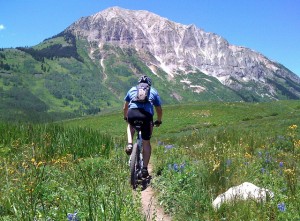 Your first mountain bike can take you amazing places

Of all the questions that come through to me through this site, the number 1 is, inevitably, “I’m new to mountain biking, how much to do you think I should spend on my first bike?”

No doubt, it’s the most common question asked of just about anyone that’s a public face around any hobby or sport. Of course, it’s simply because no-one wants to spend too much on getting into a new pastime. After all, how many people can honestly say they haven’t wasted a bunch of time and money on a new hobby, something they were going to do for the rest of their lives, only to find that it was a passing fad and the kit now lies gathering dust in the garage.

Mountain biking is no different – I’m pretty sure we could all ride happily for the rest of our lives on amazing bikes sourced from cobweb ridden sheds and lock-ups around the country. Imagine the shiny new kit that’s just mouldering away. Oh the humanity of it all!

So, in that vein, I thought I’d offer up the standard advice I give to anyone who asks me that question in person. And that answer is….. it depends.

Before you throw the nearest heavy object you have to hand at me, stop! Wait. It really does…

For: Anyone who hasn’t cycled since they were a kid

The first option, and the one most people go for, is just to buy a cheap, but serviceable bike that’ll last 6 months and give you a taste for the sport. This is what I recommend for most people that have really never cycled before.

Many who want to get into mountain biking have literally never turned a pedal since they were 14, but some of their mates are into it so they thought they’d give it a go. This is the ideal candidate for a sub £400 bike.

You want it new, because you wont know how to fix the little things that go wrong with a second hand bike. You want it cheap because there’s a 50/50 chance that you’ll ride it 3 times and then never touch it again. But, you want it to not be a piece of crap because, on the off-chance that you stick at it and grow to love the sport, you’ll want that bike to last at least 6 months on decent, rough off-road trails before you decide what type of decent bike you want to upgrade to.

There are a few options for buying this kind of bike. For the super-cheap, Tesco actually sell a large range of bikes, including the ever present Raleigh. If you find a decent deal on a Raleigh it’ll serve you well. Or, you can go a little higher and get one of the entry level big brand bikes. The Specialised Hardrock is a great choice, or the Trek 3500. Both are great brands with bikes that serve the experts well, so you know you’re in good hands.

The key here is not to get sucked into the absolute drivel that some places sell. Stick to a Hardtail, and, better yet, a brand you’ve heard of like Specialized, Trek or Raleigh. Never, ever, EVER buy a new full suspension bike for less than £750, and especially not for £150. Unless you’re a 14 year old wearing bright white trainers with a propensity for mugging old ladies.

For: Anyone coming to mountain biking from another cycling discipline.

On the other hand, if you know a little about bikes already, perhaps from a road biking background, or you’re a particularly mechanically minded person, then you can’t beat a good second hand bike for a cross between value and quality.

eBay, Gumtree and the local papers are chock-full of the bikes that we mentioned earlier – bought in haste and discarded like last week’s news. You can get an absolute bargain if you can tell your Shimano from your SRAM and are willing and able to fix up a few little things when the bike arrives.

The only problem with eBay is the choice, and there’s a lot of crap on there. Have a look at my post on buying second hand bikes to learn how to find the good amongst the bad.

I buy all of my bikes second hand – I haven’t bought a new bike since the very first mountain bike I owned and then sold again second hand 6 months later. Mostly, I shop on eBay as there’s so much choice and, if you’re canny with your bidding you can save at least 50%, often more, on the as-new price. The postage can be a bind though, so Gumtree can be a good alternative.

People tend to list bikes on Gumtree way above what they’re worth second hand though, so a bit of negotiating is often required. Get your average price from eBay and then stick to it when you’re bartering – people find it hard to argue with that.

Give Me Your Advice

I’ve given that advice out to so many people now that eBay probably owe me about a million quid. I’d love to hear from you though if you think it’s crap, or if you have other alternatives to prospective new bikers. Let me know in the comments below where you bought your first bike, what it was and whether you’d recommend someone else do the same.

Look forward to hearing from you!