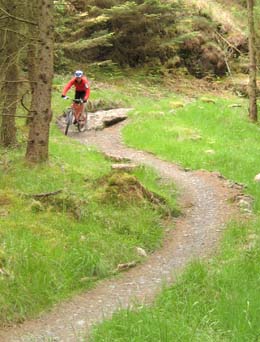 Newcastleton is probably one of the least visited of the 7 stanes mountain bike trails. It’s short (a mere 10.5km) and it’s a little out of the way, tucked down in the South East of Scotland, but if you find the time to go you’ll discover a fun little trail with one of the best north shore playgrounds in the country!

Newcastleton is a little village in the Scottish borders, pretty much unnoticable for any reason apart from the fact that the Scotland forestry commission decided to place one of it’s legendary 7 stanes mountain bikes trails here. The trail head doesn’t have too much in the way of facilities but there is a toilet you can use for changing and a little room for picking up a map before setting out. Don’t expect anything like a bike shop or an apres cycle cafe though, it’s strictly bring your own provisions!

Setting out on the trail you head up through a field of over-friendly sheep (keep moving at all costs…) before hitting the singletrack proper. And hit it you do as the Newcastleton trail builders decide to throw you straight in the deep end! The first bit of trail you see is completely man-made and involves a series of rollers and skinnies (some of them pretty high and definately skinny!) at the end of which you’re thrown out into one of the best north shore bike parks you’ll find in Scotland. 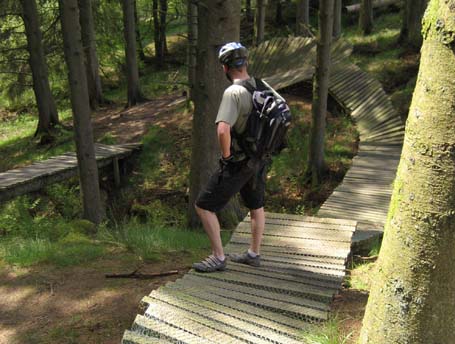 You’ll be shocked at how much time and effort must have been put into this north shore playground and it’s even more surprising when you realise it’s located in this out-of-the-way, otherwise pretty unremarkable bike route. The north shore starts on one little riser ramp and proceeds to split into at least 4 or 5 different routes through the maze of logs, planks and chicken wire. It’s a great little training area as there are easy routes, hard routes and simply ridiculous, 2-inch wide balancing acts masqurading as a bike route. My riding buddy and I spent a good hour messing around on the planks and loved every minute of it. I managed to get round some tricky little corners by the end and we bunny hopped off the last plank and onwards with huge grins on our faces.

Unfortunately, the rest of the trail doesn’t quite live up to the amount of care and attention put into the start. The first descent, following straight on from the north shore area is pretty fast and decent fun, but there’s nothing pretty technical in terms of natural obstacles, and the trail builders haven’t overly altered the landscape to up the ante. The first descent leads on to some 4×4 track and this sets another tone for the day as there’s a good bit of road following to come. 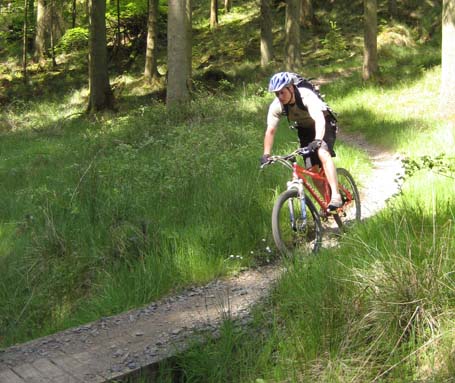 There are some awesome swooping descent at Newcastleton

There’s a leg-stretcher of a climb soon after first hitting the road and then you’re treated to a little more of the same type of descent. Reasonably fast and fun enough, but just nothing special.

The only real departure from this is towards the end of the trail (what already…? The 10km goes quite quick…) when you’re thrown into a reasonably steep little climb through a sparse forest. This spits you out into a field with some pretty good views after which you meet the final descent from the top of Swarf Hill. This is a little more interesting – the trail builders have spent a bit more time here adding in a bunch of features to liven things up. It’s also the longest bit of descending you’re offered since bottoming out the very first one so you find yourself pushing for every bit of speed you can get after the drought.

There’s some great little jumps in this section and some good berms to try and carry your speed. The ground’s pretty gravelly too, probably a symptom (or benefit?) of Newcastleton’s little use, and that keeps it even more interesting as your back wheel drifts around like crazy. Luckily for me at this point my freewheel had seized up so I gained a bit more fun due to the fact that I couldn’t stop pedalling the whole way! Jumps are never as dicy as when you have to keep the legs spinning in mid-air by the way… 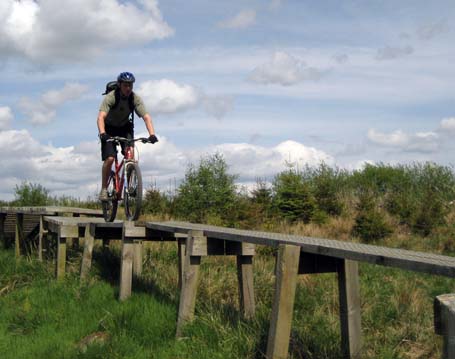 Bruce tackling a tricky little Newcastleton skinny, made worse by it's ever increasing height

At the bottom of Swarf Hill you’re ejected onto the road right next to the first set of rollers and skinnies so it’s more than easy enough to head back round again, or just nip onto the north shore for a bit more shin-gouging practise. For others it’s back down the road, past the leering sheep and into the car.

Newcastleton is definately worth a visit, if only once for a go on the northshore. Anyone other than a harcore lover of the wood will probably find it hard to work up enthusiasm for a second helping though until the trail is upgraded and lengthened a little. Given how much work the forestry commission are putting into the 7 stanes it’s probably a fair bet that it’ll receive said attention at some point though, and if so it could well be a place worth revisiting. I reckon I’ll be back at some point anyway. If you let a 2inch wide plank of wood beat you then just what kind of a rider are ya…?