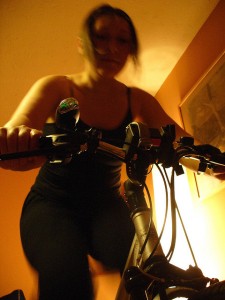 Dull. Boring. Tedious. Painful. Sometimes very painful. No, not words to describe the latest Tom Cruise film, but common characteristics of the much-hated Turbo Training session. No-one likes the turbo trainer, but there are few more convenient ways to fit a reliable training session into your busy schedule.

Despite the brain melting boredom, a static bike lets you blast out a solid hour of effort, with no rain, traffic lights or erratic white van men around to break your rhythm. But how do we get through it, day after day? Whether you ride a turbo trainer or a standard exercise bike, I might have an idea here to get you through.

How To Survive a Turbo Training Session

So, how do we get the hours in, without dropping our brain function to pavement-scraping  Bush levels. That’s George, rather than the leafy, green variety. Yes, even lower.
I’ve tried watching TV when on the exercise bike. I’ve tried music, I’ve tried films. Nothing quite distracts enough to keep me going, and stop me dreading the next session.
So, what would work? What’s distraction enough? Games, that’s what we need. I’ve recently been drawing training inspiration from an unlikely source, the world of booze. In my uni days, there was so much drinking that even that seemingly indefatigable activity soon lost it’s novelty. So, we came up with drinking games to liven things up. The Friends drinking game, for example (it was the early 00s after all). 2 glugs when Ross clears his through. 2 glugs when Joey does something stupid. You get the picture.

Remove the Booze, and Introduce the Cadence

As you know, alcohol and bikes don’t mix, despite the apparent good-thing/good-thing combination. So, we replace it with cadence.
I’ve found that turbo sessions only work if you cut it up into very small chunks, and make sure you have some short, sharp, achievable targets. 4 minutes at 100 rpm, or 2 minutes in heart rate zone 5, for example. But, that on it’s own it still pretty dull.
The key, I’ve found, is combining that with a bit of entertainment. And, enter Jack Bauer.

I’m a big fan of 24 – I’m man enough admit to a bit of a man-crush on Jack Bauer. The series is addictive, fast paced and damn hard to turn off – perfect turbo training fodder, I thought. I’ve been watching series 8 while training my recently broken leg back up to fitness, and I’ve found a unique way to keep me going and enhance the training.
The game is all about cadence, although you could replace it with heart rate quite easily if you don’t have a cadence meter. I’m using my trusty Garmin 305 Forerunner with the external cadence sensor for this. Here are the basic rules:
This doesn’t seem like much, but it fair livens up an episode of 24. I’ve been playing around with different rules, and this is enough to make en episode pretty hard work. 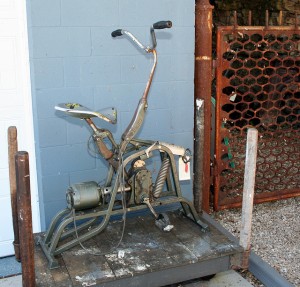 For special occasions, you can add in a few extra rules.
Resistance increases work really well, shocking the muscles into action. Shift up a gear, or two, whenever the enemy is on-screen. You’ll learn to relish those gun-battles between Jack and his arch enemy – 110 rpm on the big ring should break a bit of a sweat.
Create a stand-up rule – whenever someone is driving, you need to get your ass out of the seat. You’ll soon be glad that 24 doesn’t quite follow realistic travel times…

Let’s Have Your Suggestions

I’m almost finished with series 8 of 24, so it’s nearly all over. No more Jack Bauer, and no more Kim doing ridiculously stupid things. I’ll soon need to find a new training muse.
So, it’s over to you – can you suggest any TV series with good drinki…. er, I mean turbo training game potential? Pop your suggestions in the comments below, or email them in via the contact page. Or, even hit me up on Twitter with some ideas. I’ll put together a Post with all the suggestions and try to help us all make those turbo training and exercise bike sessions a bit less horrendous.
Cheers for reading, and enjoy the static pedalling!
Image Credits: mountvision on Flickr, and iluvcocacola on Flickr.