I’ve had my Specialised Enduro for over 3 years now, having done the first bike build over the Spring of 2008. The bike’s been amazing. I haven’t had to replace a thing since then, and only now are the cracks starting to show, the bottom bracket and suspension beginning to make some ominous knocking sounds. 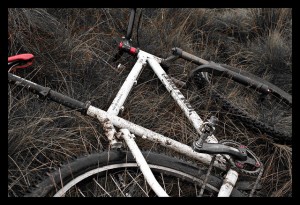 Which means, of course, that’s it’s dilemme time. I could head off to ebay, Wiggle or Chain Reaction and buy myself a new set of components, replacing bottom bracket, chainset and cables, and I could send the suspension off to the bike shop to be serviced without any worry (the bouncy bits’ innards are still a mystery to me). I’ve looked into it though and we’re looking at probably £250 in parts and £150 in servicing in total to build my mountain bike back up to fully working order. That’s £400, just to have the bike I already own!

“Great British bike build? What are you on about?” I hear you ask. Well, I’ve taken a bit of a notion recently to shopping locally, buying into the local community, blah blah blah. Yep, I’m afraid I’ve become a hippy. Ok, not quite that extreme, but, with all the turmoil going on in the world just now, I’m just into the ‘support our own country’ caper.

I’m trying to buy stuff from smaller local producers – the independents that struggle to make it, but offer amazing quality and value along the way compared to the big global conglemerates. This obviously applies to food, drink and small products mostly, but it can equally apply to the bigger stuff in life. Such as bikes!

For this bike build I’m going to use as many components as I can which are made in the UK. I’m going to have to stick to my price range, so I may end up with a shimano or SRAM chainset as I’m not sure whether you can buy a UK made chainset for a reasonable cost. But the bigger items, such as frame, forks, wheels, saddle, and as many other parts as possible, will all be UK made. I’ll look into it all though – for all I know there’s a great little producer in the Lake District that makes great value derailleurs that I’ve never heard of. Well, during this project I’ll find out.

But, first and foremost, the important part, my new mountain bike frame.

This is the major part I want to keep home grown and, even better, I’d love to keep small and little known. There are a number of UK mountain bike frame manufacturers and they range from internationally known giants such as Orange, down to lesser known brands such as Cotic. Lets look at them all: 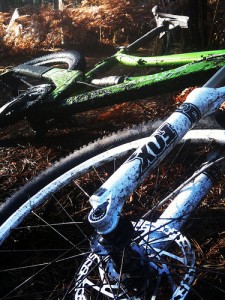 We might as well start with the big boys – Orange. Internationally known and oft-used in the competitive downhill leagues, Orange are the UK boys done good. Some of their lower-end frames are outsources to the far east, but I believe a number of their higher end frame are still manufactured in britain.

I’m looking at a cross country or all mountain bike so if I were to go orange it would be the Orange Five or the Orange Alpine I’d be looking at.

Here’s where I’m looking for some input from you lot out there though. Do you have any experience with Orange? If you were build a dream Orange bike from scratch, what frame would you start with? Please leave me a comment in the comments area below.

Now, Cotic are a make that seem to be popping into my conciousness on a regular basis lately. I’ve had a number of people mention them when I’ve dropped my new bike idea into the conversation, and the model that keeps popping up is the Cotic BFE. The most recent quote was: “Get a Cotic BFE with 2.5 Tubeless Tyres and 160mm forks and you’ll not stop smiling.” Endorsement indeed, cheers Ross!

Again though, any advice much appreciated. What’s your experience with Cotic?

On-One are a bike brand I’ve been looking at for a while, but don’t really know all that much about. They always seem to attract fanatical fans who build up super crazy bikes, such as an On-One fixie intended for suicidal mountain training riders. They have a few frames that look interesting, including the Inbred and the Whippet, but the inbred seems to attract the most attention – could be a good choice. 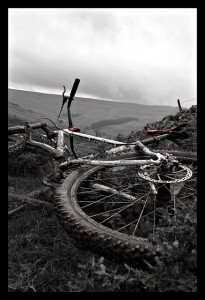 An On One Inbred mountain bike at work - Placid_casual Flickr

Over to you – what’s your experience with On-One?

Whyte are a bigger brand, probably second only to Orange in sheer number of bikes-on-trails. Whyte always seem, to me, to follow a bit of an Orange philosophy in terms of chunky frames and helluva sturdy looking bikes. I really like the look of the Whyte 146 and it’s point and shoot design seems to be picking up some great reviews. The Whyte 120 is possibly more suited to my normal type of trail use though. Decisions decisions. Then again, I had been ambitiously contemplating a cheeky titanium model – how could I resist the Whyte 19 ti?

Tell me what to do! Let me know what your experience is with Whyte in the comments below.

A smaller outfit, and probably, as far as I can tell, the least known of the companies I’ve mentioned, Pace have a range of hardtails and full suspension mountain bikes that cater to pretty much all trail riding tastes. They’ve even released their own 29er recently, joining the herd on that particular bandwagon. But hey, choice is no bad thing! I’m liking the sleek, curving lines on their Pace RC204. The spec looks good too – a super light mountain bike with an agressive geometry – all the ingredients for a fantastic ride. Their original Pace RC405 looks a bit more set up for a comfy ride around the rough stuff though. What to do…

Pace are one company I haven’t really heard anything about – no reviews, nothing. I need some experienced Pace riders, let me know what you think in the comments.

There are a few others that I haven’t mentioned and a number I’ve missed I’m sure. Makes such as Pinnacle or Mercian aren’t included here simply because I’ve never even looked at their range. If you know a bit about them, though, or of a brand that I’m missing out on and shouldn’t be then let me know. It would be great to get more folks on local bikes and give the UK bike industry a bit of a boost.

I Need Your Help – Help Me Build Our Dream UK Bike

The header says it all – I’m asking you guys to get in touch, share your knowedge and help both me and other readers and potential bike builders out. I’ll be waiting with baited breath for your comments and emails. I’m going to base this bike build on feedback from you, the all important readers of this site, and hopefully create an amazing steed with your help.

So, send it in – tell me what to buy and we’ll create a fantasy UK bike to be proud of!