Recovering from the Big Break: A Femur Fracture

They say everyone has one big crash.

One moment in your riding life that you remember oh so clearly. When much more than 1 second’s worth of thoughts seemed to go through your head in far less than a second. But, annoyingly, none of those thoughts, as quick as they were, were quite quick enough to stop it from happening…

“What the Hell Happened?!” 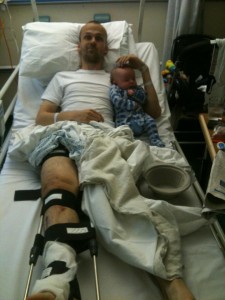 Since then, I’ve been asked that more than once. I suppose it’s a bit ironic that after years of throwing myself off jumps, round berms and over drop-offs, that the biggest injury I’ve ever had would be caused by a frickin’ roundabout. Then again, at least drop-offs don’t move. Jumps tends to stay relatively still when you approach. And I’ve never seen a berm change lane when it wasn’t meant to….

Two minutes from the front door of my work, turning right on a round-about, an unwise lane change has cost me a year of running, over half that of biking, and about quarter of a year of any decent movement at all. A moment of mis-judgement saw me keeping too many eyes on the traffic around me, and not enough on where I was going.

And it’s never the lamp post that cracks. Especially not twice. My femur wrapped itself around the post, breaking just above the knee and about two thirds of the way up towards the hip. Mercifully, the bit I remember clearly is the half second between looking up to see the kerb in front of me and the jolt of hitting it. The few seconds following that have blanked themselves from my mind. The next thing I remember is sitting up and looking down at a right leg that definitely….. wasn’t… quite…. right….

In my memory, everything’s quite quiet and peaceful at this point. Dreamy even. A little puzzled, I moved my foot, just to make sure. The toe of my boot jerked upwards and the whole leg wobbled like a big bowl of jelly. Yep. Something wrong here.

At that point everything seemed to rush back to me. I knew right away what I’d done, and I knew how serious a fractured femur was. I started shouting like crazy, waving my arms like a madman. I didn’t have too much to do with the rest to be honest. Cars stopped, samaritans arrived, ambulances were called, and I was off to hospital, jabbering away, drunk as a skunk on gas and air.

How Long Does it Take To Recover from a Fractured Femur?

This is the story of what happened after the surgeon’s worked their magic, spending 5 hours cutting me up, pinning the bone together and stitching me back into one piece. I found it pretty hard to find any good info on recovery times and methods. Noone really talked about when exactly I’d be able to do the simple things. When would I be able to get into bed without help? When could I get off the painkillers? When the hell would I be able to sit on the toilet like a normal person again?

How to Get Back to Your Old Level of Fitness

On top of that, most of the recovery material you read is for your average person. And, not to put too fine a point on it, but it’s not very hard to be a bit fitter than average… If you’re into your biking you’re almost certainly fitter than average to start with. And if you break your leg, you’ll want to get back to that level of fitness. Well, I’m hoping to find out how to do that over the next 6 months (writing this, I’m 3.5 months post-break) and I’ll log it all here.

So, time for the long road back. Let’s get this leg moving.

I fractured my femur on Monday the 14th of May. I actually stayed a night in hospital with a still-broken leg, the surgeons not ready to operate until the next day. So, Tuesday, they fixed my fractured femur and we moved on to the first day of the recovery. Here we go.

As a little side-note here – I hope none of this comes across as too melodramatic. If you’re reading this because you’ve gone through it and you’re looking for a bit more info, then you’ll understand. But if you haven’t…. It’s funny how I used to think it wasn’t such a big deal, breaking a leg. You just spend a few months in a stookie, then you’re fine. Yea? But, a leg. A femur especially. Honestly, you’ve no idea. I certainly hadn’t anyway….

So, in Hospital all week. My first encounter with the infamous Physio was Wednesday. At this point I couldn’t move in any real way. I needed someone to lift my leg for me if I was to even shift up the bed. My leg wouldn’t bend more than about 5 degrees, the knee was so swollen up. So, first job, get the leg bending. They put a pillow under the knee and asked me to try lifting it, to bed it very slightly. I couldn’t believe how much it hurt, even on morphine. I gave it a go though, probably not to any great extent. That’s enough for one day…

Getting Out of Bed

Much to my own surprise, I got up for my first ‘stand’ on Thursday, whipped along by the Physio. I could barely keep from keeling over with the lightheadedness that came over me though. I was encouraged into giving movement a go nonetheless. I ‘walked’ on two crutches to the front door of the ward – maybe 8 steps –  and had to go back because I was knackered. Properly bone tired. They decided, based on that and my blood tests, that I needed a transfusion, which I got the next day.

On the ‘walking,’ I was pretty surprised to hear from the orthopaedic surgeon that the pin in my leg meant that I could put weight on it straight away. I’ll tell you though, no matter how many letters a guy has after his name, 3 days after breaking your leg, you’re not going to believe him. My walk to the door encouraged by the physio led me to put the tiniest bit of weight on my leg with each step. Well, it hurt, but not as much as I’d feared. Maybe he wasn’t talking complete rubbish. But hey, back to bed. 16 steps. Enough for another day.

At least the blood transfusion gave me a respite from the physio… All day in bed, not allowed to move. The pain killers were keeping it all mostly under control so I could enjoy the visiting hours.

Oh, to be Transfused

Tell you what, if you’re feeling a bit peaky, I thoroughly recommend a blood transfusion. Don’t listen to what they tell you about risks, dangers, blah blah blah. I felt amazing the next day! I walked out the hall to the lift on Friday, but turned back, still really tired. The slightest jerk to my leg was agony. Scuffing my foot on the ground was the worst risk, and prompted a cry of pain. And it happened a lot considering I still couldn’t bend my leg more than 5 degrees.

To the less savoury bits – I managed to go to the toilet for the first time on Friday. That was literally one of the most uncomfortable experiences of my life. A leg that wont bend, and is agony to move in any way. A bowel that hasn’t shifted in 5 days, full of hospital food. That’s not a good recipe for sitting upright on the pan. Cue at least 30 minutes of pain, squeezing and balancing a leg on a wheelchair in a space far too small for it. Lovely.

By Saturday, movement was looking a bit more possible. I was walking around very slowly and got a bit further that day – almost to the front door. I felt like I couldn’t remember what fresh air felt like. I doubt I’d been inside that long solidly since I was born. There was talk of getting out the next day though. I couldn’t wait.

Home on Sunday, at long last! I managed to fit in the back seat of the car, just, by sitting on one side and lying my leg along the seat, supported against the back of the front seat. It was a nerve wracking journey though, every jerk and wobble sending spasms of pain up my leg. It was worth every jolt though, crutching through the front door of my house and onto my own couch. Sitting next to my three month old son. Oh yea, I haven’t mentioned him, have I?

Three months old. Good time to break a leg, eh? What an idiot…

Don’t worry, things speed up from here on in. Read about the next month in the next post. Thanks for visiting!