Designed specifically for younger children, each Puky Bike is built to make biking a little bit easier for the first time rider. In addition to balance bikes, Puky also manufactures trikes, scooters and go carts.  Each bike is built in Germany from the highest quality materials. Puky is considered the premier manufacturer of bikes for children and focuses on making the process of learning to balance as easy and painless as possible.

Review of the Puky LR1:

The Puky LR1 makes it easy to teach your child how to ride a bicycle without breaking the bank.  Built to teach balance first, the Puky LR1 does not have any brakes or pedals. Instead, kids can focus on the most important aspect of riding a bike before worrying about pedaling. 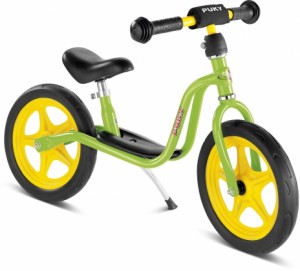 The Puky LR1 is considered the best balance bike on the market because of its simplistic design and ease of use.  Because it has an adjustable seat, your child can grow into the bike as they age before it is passed on to a sibling.  Reviews online rave about how quickly their child learned to balance and how the transition to a pedal bike will now be much easier.

Despite not having brakes, parents are not concerned with safety because the Puky LR1 is not designed to reach high speeds.  By using their feet to gather a little bit of speed, the rider will then be able to lift their legs and focus on keeping the bike upright.  Reviews give positive marks to the Puky LR1 because of its exceptional build quality that makes it possible to use the balance bike with more than one child. Using a balance bike like the Puky LR1 means that your child won’t have to learn to ride with training wheels. Instead, the Puky LR1 allows the young rider to adjust to balance at their own rate before moving on to a larger bike without any stabilizers.

Puky Bikes: the best of the rest

Essentially the same concept as the LR1, the Puky LR XL Learner Bike is meant for slightly older riders (3+).  The only differences between this model and the LR1, is that the XL Learner Bike has a rear V-Brake and is built for children taller than 95 cm.

Unlike a balance bike, a trike has three wheels and is not meant to teach a child how to operate an adult bicycle.  However, what this trike does have is a brake and pedals that are critical components of operating a bike.  With an adjustable guide pole attached, parents can help steer the rider in the right direction while still giving them autonomy and control.

By the time your child is ready to ride a bicycle without stabilizers, safety is the number 1 priority.  The Puky Z2 is perfect for the 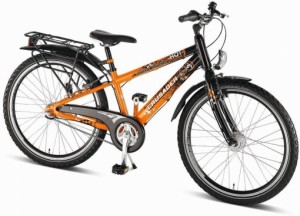 youngster who is ready for their first bike because it has safety features like a low step for easy access, brake pedals and much more.

To find out more about Puky bikes go to the Puky webpage.