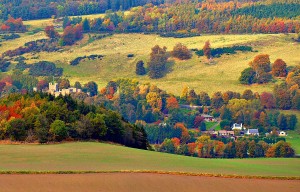 The Sidlaw Hills are a prime example of the first-class mountain biking in Scotland, and it’s practically right on the doorstep for a decent percentage of the Scottish population!

Situated north of Dundee, access is relatively straight-forward from the main roads in and out of Dundee and Aberdeen. The last part of the route is along the Tealing B-road, but it’s generally not busy and is easy to drive.  There is plenty of parking however. Balkello Community Woodland has a good car-park and plenty of space for kitting up, unloading bikes etc.

Having spent a bit of time walking and running in the Sidlaws, I was well aware of the mountain bike trails and had seen plenty of guys and gals enjoying those on offer, but I hadn’t experienced it for myself until the sun started shining once again, signalling the start of summer in Scotland. I felt it was high time I got back on my hardtail, and took myself for an after work whip around the hills.

What a treat – there are more trails than you could shake a stick at, and a great variation of such. There’s even some decent, steep singletrack and a great little quarry for the more adventurous mountain bikers.  One of the best things about the trails in the Sidlaw Hills is the accessibility. I’m not sure everyone could peddle their way to the top of all the hills, but it is possible to get to the summit of each hill via the trails, and enjoy the panoramic views across Dundee and into the spectacular Angus Glens.  Most of the trails link up with each other, so although it is possible to go a little off course, it’s pretty difficult to get lost.

The views, and wildlife are one of the highlights of the Sidlaw Hills. Realistically there isn’t much else around, no shops, coffee and cake stops; there’s nothing really, and that gives the trails a real sense of remoteness and wilderness, even though they are just a stones-throw from the city.

I didn’t follow any specific route, but there is a map in the Balkello Community Woodland car-park, and an OS map (OS Explorer – Dundee and Sidlaw Hills – 380) will have all the trails marked.  I relished the opportunity to explore, safe in the knowledge that I probably wasn’t going to get lost. It was steep, muddy, marshy, rocky and rooty in places – some sections of the trails would perhaps get a moderate grade, especially if wet – but there was also plenty of relaxed riding that allowed me to enjoy the surroundings.

For a bit of fun, peddling up to the quarry trails is worth the effort. The trail is good from the car-park but it gets pretty technical at the quarry, and there are a few vertical drops to the sides. I’ve scrambled down one during a run, and wouldn’t fancy it on the bike!  If you don’t fancy the quarry, it is still worth the peddle up. It seems to be the least used part of the Sidlaw Hills, and as a result is just wild with roe deer and birds of prey!

The Sidlaw Hills definitely offer something for every grade of rider. I was very impressed and there is far more to explore than an evening ride would allow. Great potential for a full day at least.  I would recommend bringing all the supplies you need – food, water, etc – as there are very little amenities in the surrounding villages.  The hills in Angus are quite low and the views can still be really great even on a cloudy day.