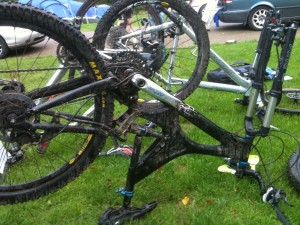 It’s been a busy week for me so no trail reviews I’m afraid (I have one in the pipeline for next week so please bear with me!) but I’ve got some follow on news from my posting earlier in the week in the form of a possible new bike purchase!

I’ve always been interested in trying a full bike build from scratch but never quite taken the plunge. So, with the departure of my Specialized Epic earlier in the week, I decided now’s the time! Hopefully it’ll also give me some interesting antics to pass on here in the hope that others can learn from my inevitable mistakes!

I’ve got my eye on a second hand Specialized Enduro S-Works 2004 frame (the one that looks like some sort of crazy star trek gun) which I’ve read a lot of good things about so hopefully by the weekend I might have it in my possession. Any advice from readers on it would be much appreciated but I think it looks like a great deal at £430 so I reckon I’m going to go for it anyway!

If you’re looking at buying a second hand bike yourself, check out my previous post on what to look for. I’ve bought 4 bikes on eBay now, some good, some not so good, so learn from my mistakes. Read about it here: Buying second hand mountain bikes on eBay. There’s a great range on eBay a lot of the time, for example:

UPDATE: The Enduro’s been purchased and it’s awesome. It looks like some sort of space-age alien gun when totally stripped down, even better! The frame came with a headset fitted, saving a fair bit of effort there, and it’s a pretty eye-watering blue colour, sure to catch a few looks out on the trail.

Now to find the other parts though, that’s the difficult bit. My plan is to buy most of the other parts new, barring the wheels which are a bit too expensive to get brand new and are pretty easy to source on ebay in any case. I’m looking at a set of Mavic Crossrides with a set of Highrollers, the highrollers being new obviously. Other new parts will include the fork (looking at a Rockshox revelation here) and a fully new drivetrain, simply because they wear out pretty fast and so can be a bit iffy if bought online without a chance to check the condition.

Follow the build in my later posts, starting with:

And please drop me a comment in the box below – have you attempted a bike build? If not, what put you off?

Look forward to hearing from you!